Learn a little more about the world of international conferences. 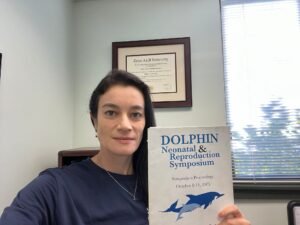 Who hasn't dreamed of traveling and attending conferences about their field of work? But we know it's not that easy! We have challenges such as: language, budget and locality. For this edition we invited Gisele Montano, veterinarian and marine animal researcher, to talk a little about her experiences and the congress she will participate in 2022.

I remember that the first time I went to a congress in the United States, I was still living in Mexico City and I was studying veterinary school, in 2005. I didn't speak English well, but I invited a friend who really liked to travel (and spoke good English).

We arrived in Chicago and it was colder than I thought. We stayed at a hotel near the conference. I remember jotting down everything I could from the slides. I tried to understand what the speakers were saying. I ended the day very tired, read everything I had written and tried to remember people's faces and names. As we were students and didn't have a lot of money, our dinner was a banana and a muffin from the hotel's free breakfast. I couldn't socialize much, as I was ashamed of my English and lack of experience (of course, as I was still a student). I was the youngest in that environment and the only Brazilian. The world of clinics and breeding of aquatic animals from zoological institutions is very small. The people who were there at that conference continue to work in the area and I have collaborated with and seen them ever since. I'm glad I didn't give up or get discouraged.

There is a conference I would like to go to every year (IAAAM, International Association of Aquatic Animal Medicine). I consider it almost a meeting of friends, because our world of medicine in marine animals in zoos is really small. There are about 350 people from various countries. It is the most important in the world, since the best professionals are always present and the lectures are very interesting. But to make a comparison, and to give you an idea of ​​the dimensions of the conferences in the United States, the VMX (the largest meeting of veterinarians in the world, which takes place every year here in Orlando, FL) received a record number of 18.000 people in 2018 in an event that lasted 5 days. Let's take a second to think about how they organize an event of this size, with several classes, workshops and meetings taking place at the same time in the largest convention center in the city.

This January I participated in the international congress on animal reproduction (IETS). I was happy because it focused precisely on the area in which I work. I usually go to aquatic animal conferences, but the focus was mostly clinical, with some reproduction lectures. I attended the pre-conference, which lasted one day (a reflection of the size of my professional world). But the topic was animal breeding in non-domestic, companion or endangered species, a subject of my full interest. The other days were dedicated to the technological development of reproduction in domestic animals, mostly cattle. It's really amazing the level of technology that can be applied, but many of them I still can't use in my work. But I'm proud to make my contribution as much as possible. This year, at this same conference, a colleague will be exhibiting a poster we made together on methods of freezing shark semen. The advancement of science sometimes requires patience and determination.

If you want to know more about the research that Gisele participates in, visit: www.SeaWorldcares.com  e www.reproductiveresearch.com

Corporate lectures – what look to wear?

Buying real estate outside Brazil, is it worth it?

Undertaking outside Brazil – from the Amazon to...

Positive Parenting – Where to start?

I became a mother, now what?

True success is within your reach

What it takes to build a career...

Give up, don't even think about it! New book by Roberto Shinyashiki

About Magazine Brazil Away

Magazine Brazil Away – Your home away from home. The online magazine that connects Brazilians around the world.

This website uses cookies to improve your experience. We'll assume you're ok with this, but you can opt-out if you wish. Accept